The best chances for seeing MADAME BERTHE’S are in the wild are in the KIRINDY FOREST, part of former 10,000-ha logging concession located 60 km northeast of Morondava. Tourists can reach KIRINDY from Morondava via regular taxi-brousse service (wich drops you off 7 km from the camp ), by arranging an overnight excursion through one of the Morondava hotels. A tourist camp was constructed there in 1996, but the facilities are rudimentary. Both MADAME BERTHE’S and the GRAY MOUSE LEMUR can be seen during night walks around the campsite, along forest grids within the concession, and on the Pandanus trail.

The best places to see REDDISH-GRAY MOUSE LEMUR are at the forest called « PK32 » near Ifaty, north of Tulear, and at TSIMANAMPETSOTSA NATIONAL Park.

Night walks at « PK32 » are possible from many of the hotels in the Ifaty Mangily coastal tourism area one hour north of Tulear. TSIMANAMPETSOTSA NATIONAL PARK is two-hour drive from Anakao (another coastal tourist spot with several hotels) and a 45-minute boat ride south of Tulear.This mouse lemur is also readily observed in the spiny forest in BEZA-MAHAFALY SPECIAL RESERVE located 35 km northeast of BETIOKY SUD, about a five-hour drive from Tulear in a four-wheel-drive vehicle.

With a little patence, this species can be seen easily almost anywhere within its large range. Particularly good opportunities exist at the BEZA-MAHAFALY SPECIAL RESERVE, the KIRINDY FOREST, and ANKARAFANTSIKA NATIONAL PARK. Excursion to KIRINDY, which has a basic campsite. The AMPIJOROA campsite has been upgraded recently and now contains the locally managed « GITE D’AMPIJOROA » with comfortable rooms and a restaurant. In addition, more upscale chalets have recently opened at la RAVELOBE across the road.

The best chances for seen pigmy mouse lemur in the wild are in the TSINGY DE BEMARAHA STRICT NATURE RESERVE, where there are now two lodges to accommodated visitors.

This species can be seen with relative ease during night walks in forest surrounding Ravelobe lake near the tourist camp at AMPIJOROA in ANKARAFANTSIKA NATIONAL PARK, which now has the locally run Gite d’Ampijoroa at the campsite and some chalets et RAVELOBE lake. 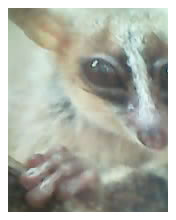 The best chance to see SAMBIRANO MOUSE LEMUR in the wild is in the Manongarivo Special Reserve. The reserve can be reached by four-wheel-drive vehicle from AMBANJA, which is about 60 km to the north. There are several hotels in Ambanja and at least two very good ones nearby Ankify.

At this time the only reliable places to observe NORTHERN BROWN MOUSE LEMUR in the wild is the ANKARANA SPECIAL RESERVE and the ANALAMERANA SPECIAL RESERVE. Organized excursions are available from some hotels in Diego-Suarez. There are basic campsites in the park and very simple accommodations at the Mahamasina entrance along RN6 (National Road), 108 km from Diégo-Suarez. The best of these is the “campement des Anglais” ( English camp), located in a forested canyon accessible from the west by four-wheel drive vehicle in the dry season and by hiking from Mahamasina all year round. For those who prefer not to camp there is a comfortable hotel in nearby AMBILOBE, about a 45-minute drive from the reserve entrance at MAHAMASINA.

The rufous mouse lemur can be readily observed in number of the protected areas in which it occurs, including RANOMAFANA NATIONAL PARK and NOSY MANGABE SPECIAL RESERVE. RANOMAFANA now has more good hotels. Stays at the well maintained campsite on NOSY MANGABE can be arranged through lodges in MAROANTSETRA such as the Relais du Masoala.

Can be readily observed in the ANALAMAZAOTRA SPECIAL RESERVE near ANDASIBE (=Périnet), about three hours drive east of Antananarivo. There are three lodges to choose from: the up-scale Vakona Forest lodge, the conveniently located hotel Feon’ny Ala, and the quaint Hotel du Buffet de la gare, wuch also has a row of new higher quality chalets.

This is absolutely one of the more difficult lemur species to find in the wild, and indeed many experts who have worked for decades in Madagascar have yet to see one. If you are lucky enough to catch one in your flashlight beam, you will have to get close enough to see the hair on its ears to be sure it is a Trichotis. The best opportunities for viewing it are at the ANALAMAZAOTRA SPECIAL RESERVE and the “Forêt de Vohidrazana” near the Village of FANOVANA, approximately 12 km east of Andasibe, although its observation in these areas remains very unpredictable.

Coquerel’s giant mouse lemur is easily seen in the KIRINDY FOREST north of Morondava, where it is sympatric with five other nocturnal species (MICROCEBUS BERTHAE /MICROCEBUS MURINUS/CHEIROGALEUS MEDIUS/LEPILEMUR RUFICAUDATUS, and PHANER FURCIFER).VOHIBASIA and ZOMBITSE NATIONAL PARK are also good places to observe it and are located about 150 km (about 2hrs drive) northeast of Tulear.

Is easily seen in secondary forest near AMBANJA in the northwest, especially in abandoned orchards.

This species is readily seen in RANOMAFANA NATIONAL PARK and the MANDENA CONSERVATION ZONE (northeast of Fort-dauphin). In Mandena, it can be seen together with C.medius, but only during the west season (October through April). As with most other nocturnal species, it is most easily found by using a flashlight or headlamp to locate eye shine. Most sightings are in the understory and lower to middle levels of the forest canopy, but this species also can be seen high up in the canopy as well.

A good place to see this dwarf lemur in the wild is the Analamazaotra Special Reserve near Andasibe (=périnet). Dwarf lemurs are quite common there in the wet season (November through April), and can sometimes be seen feeding on traveller’s palm(Ravinala Madagascariensis).

The fat-tailed dwarf lemur can be seen in many places throughout its range, but usually only in the rainy season (October through April). Particularly good sites for viewing it are the KIRINDY FOREST in the southwest, ANKARAFANTSIKA NATIONAL PARK in the northwest, and the dry forest near DARAINA in northeastern Madagascar, where it seems to be particularly abundant. Visits to DARAINA are now being arranged by small number of international tours operators, mainly for people wishing to see the golden-crowned sifaka(propithecus tattersalli).These excursions can also be arranged through DIEGO-SUAREZ. As with other nocturnal lemurs, this one is best found using a flashlight or headlamp to locate its eye shine.

The best locations in southern Madagascar for viewing what we believe to be this species of cheirogaleus are the BEZA-MAHAFALY SPECIAL RESERVE to the east of Tulear, TSIMANAMPETSOTSA NATIONAL PARK, and the VOHIBASIA AND ZOMBITSE NATIONAL PARKS, which can be reached by car from Tulear in about 2 hrs. VOHIBASIA and ZOMBITSE are also good locations for seeing the ring-tailed lemur and verreux’s sifaka.

There are currently no known sites that we can recommend for viewing this species in the wild. However, one could attempt to visit forest fragment in the vicinity of AMBOSITRA.

There are currently no known sites that we can recommend for viewing C.ravus in the wild. However, if this species turns out to be one that inhabits mostly lowland coastal forest, then the forest Station of Itampolo north of Tamatave is highly recommended.

There are currently no known sites that we can recommend for viewing this species in the wild.

The eastern fork-marked lemur is most easily seen in the MASOALA NATIONAL PARK, especially near the LOHATROZONA campsite. Lodging is available on the mainland at MAROANTSETRA, notably in the excellent “RELAIS DU MASOALA” and excursions to the MASOALA PENINSULA can be arranged through hotels in Maroantsetra.

Is most easily seen in MONTAGNE D’AMBRE NATIONAL PARK and in the “forêt d’Ambre” special reserve, where it is quite common. Particularly good sites include the forestry station (station des roussetttes) and botanical garden of the montagne d’Ambre National park. There are now excellent lodges at montagne d’ambre, domaine de Fontenay and the nature lodges, and the park is easily reached by car form DIEGO-SUAREZ, a trip of about 45 minutes.

Is most easily seen in the VOHIBASIA and ZOMBITSE NATIONAL PARK and the KIRINDY forest north of MORONDAVA where it is quite common.

This species is most readily seen in the forest of BERATY west of route national 6 about 45 km of Ambanja. Excursions to BERATY and the AMBANJA area can be arranged in DIEGO-SUAREZ or NOSY BE. There is basic accommodation in AMBANJA and more good hotels at Ankify nearby. Anywhere that tall forest remains on the Ampasindava Peninsula is also a good bet for finding this species. 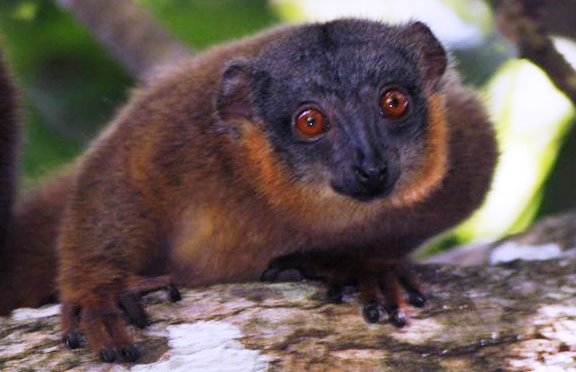